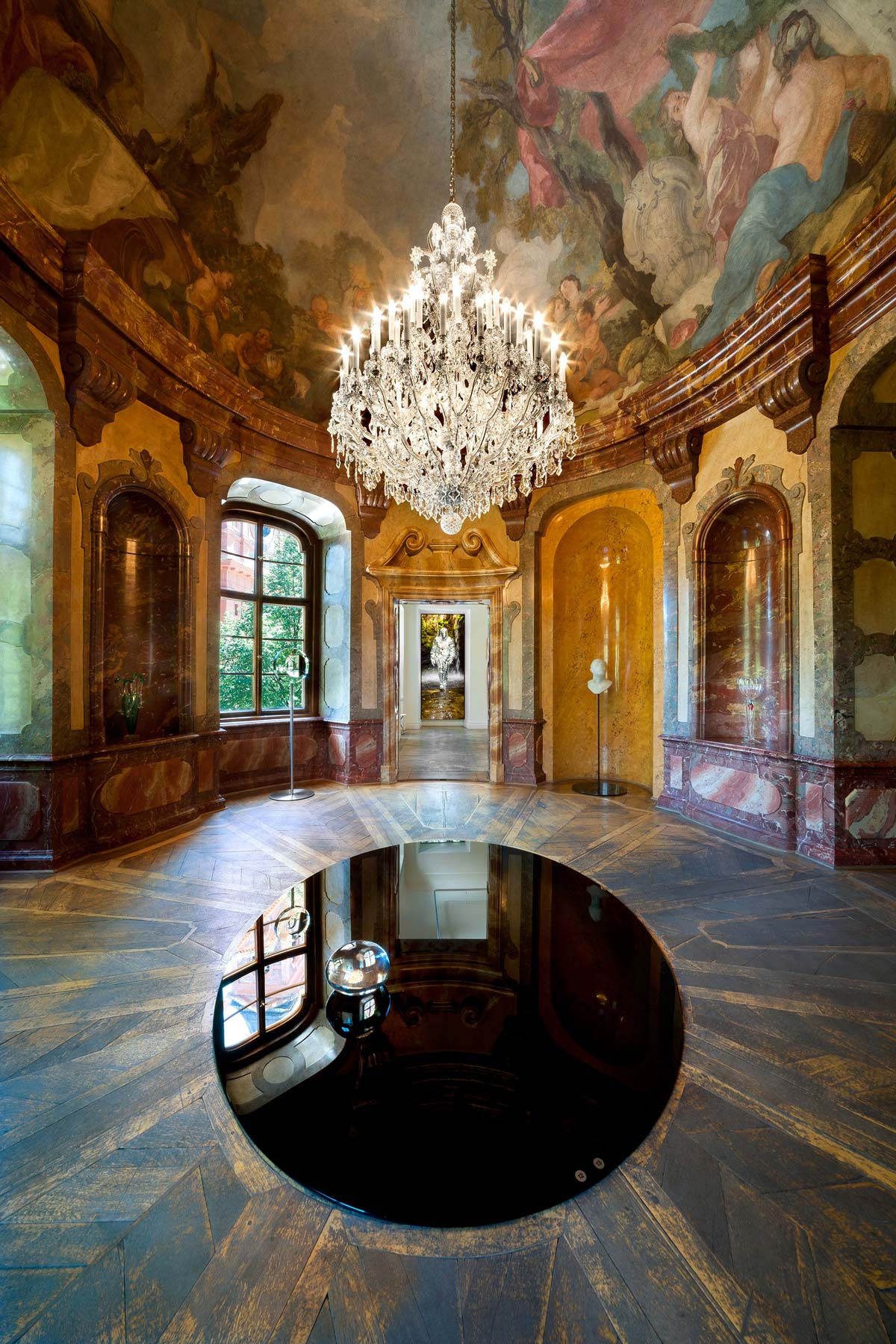 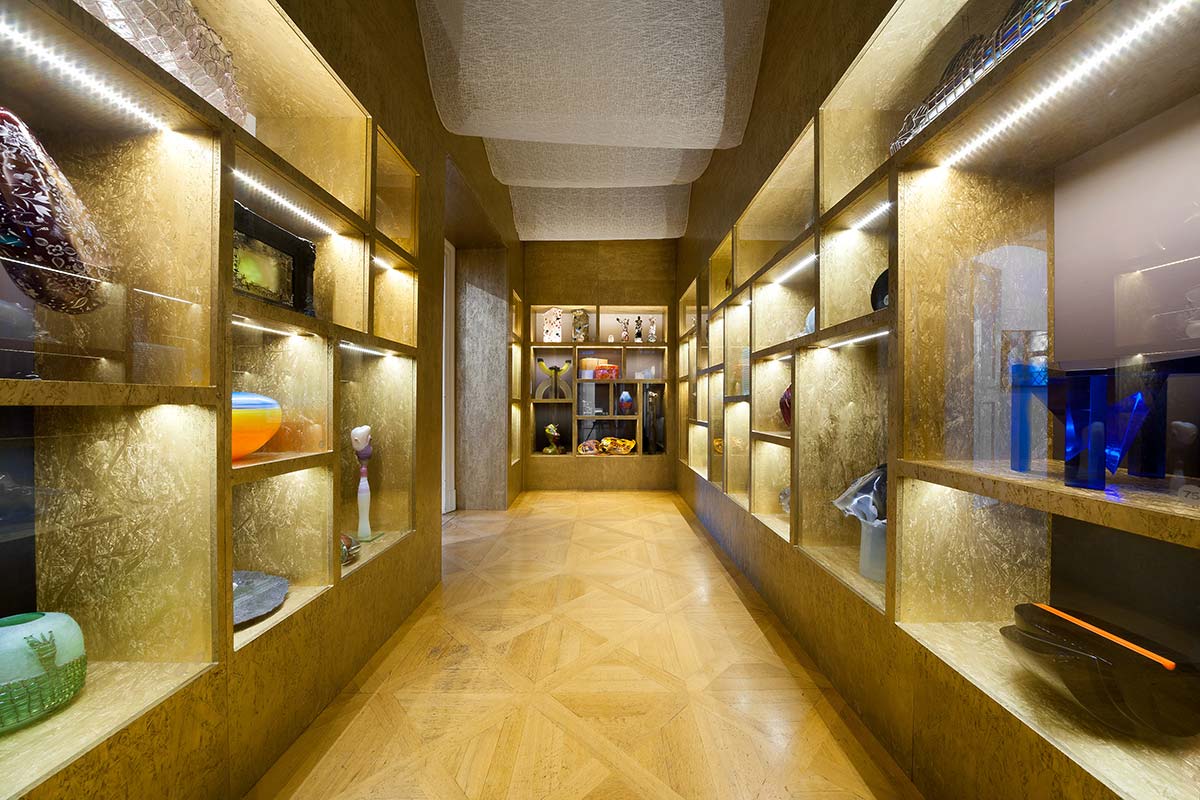 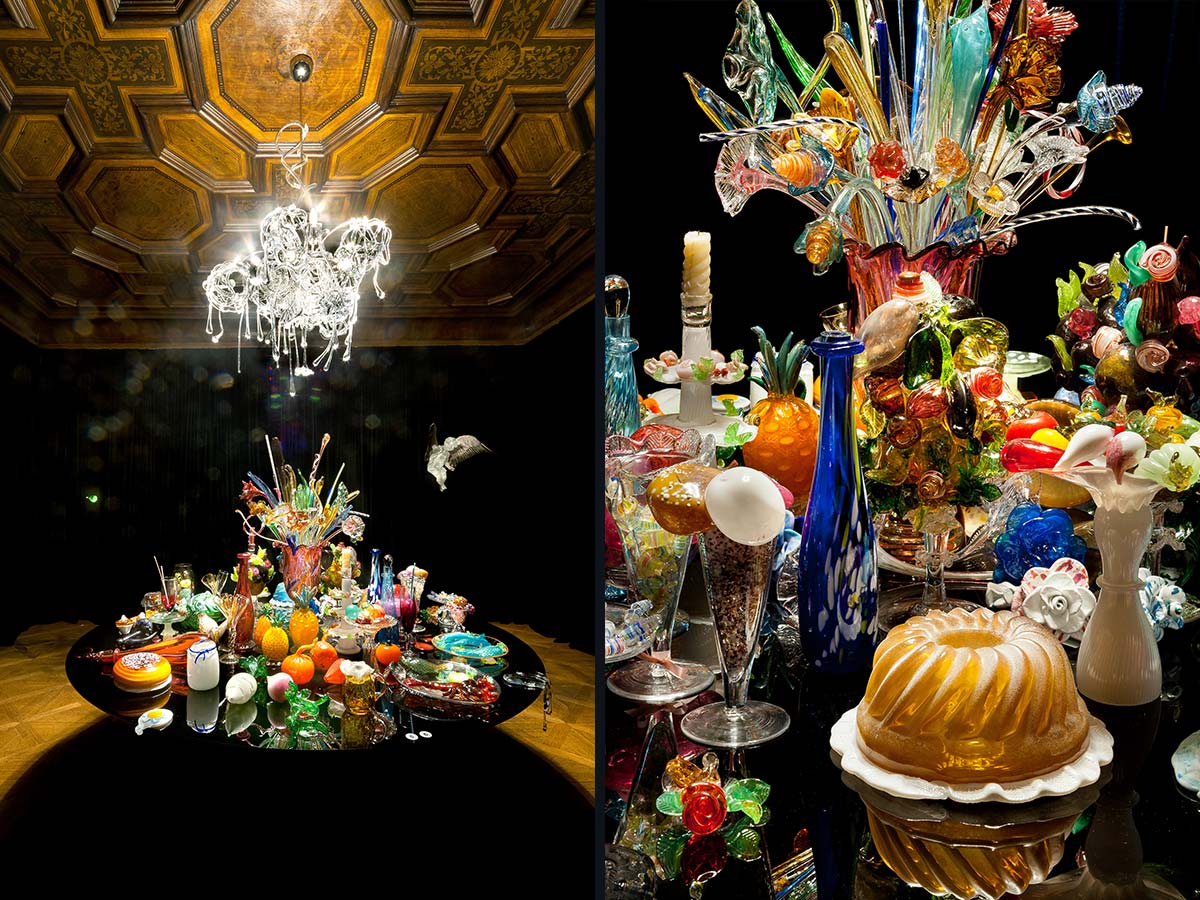 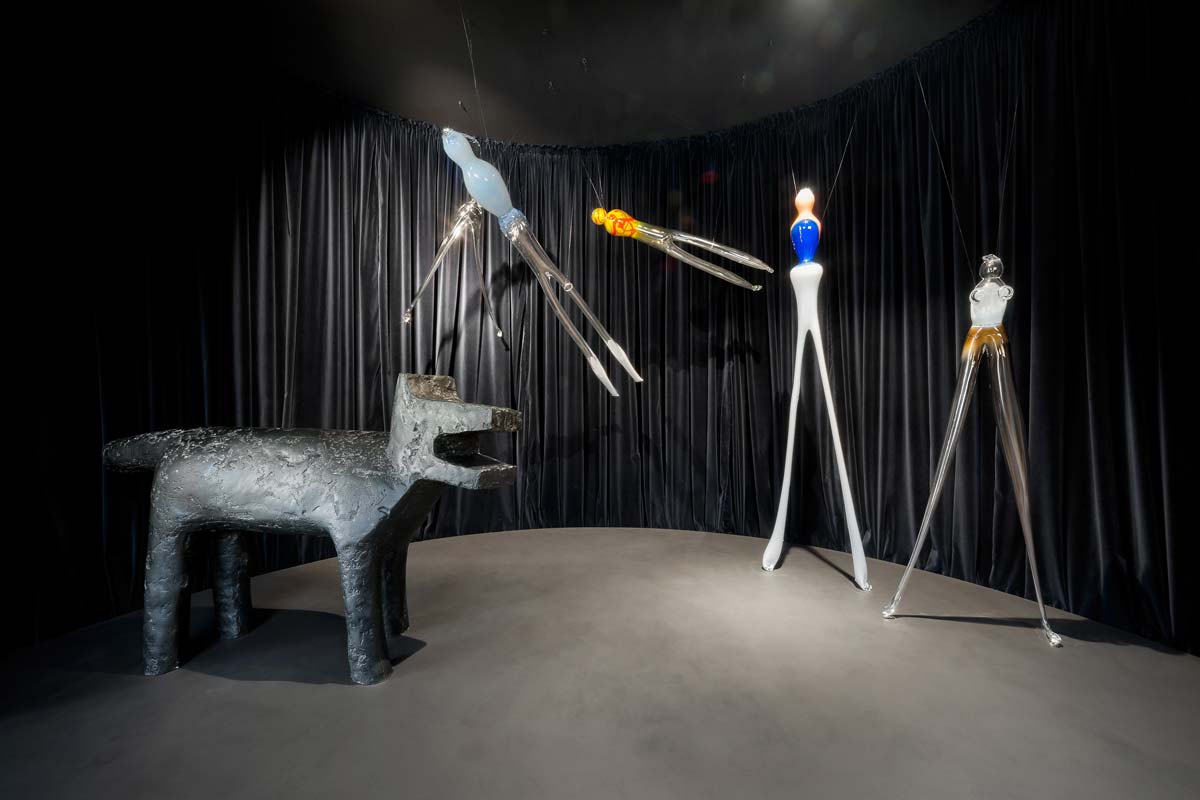 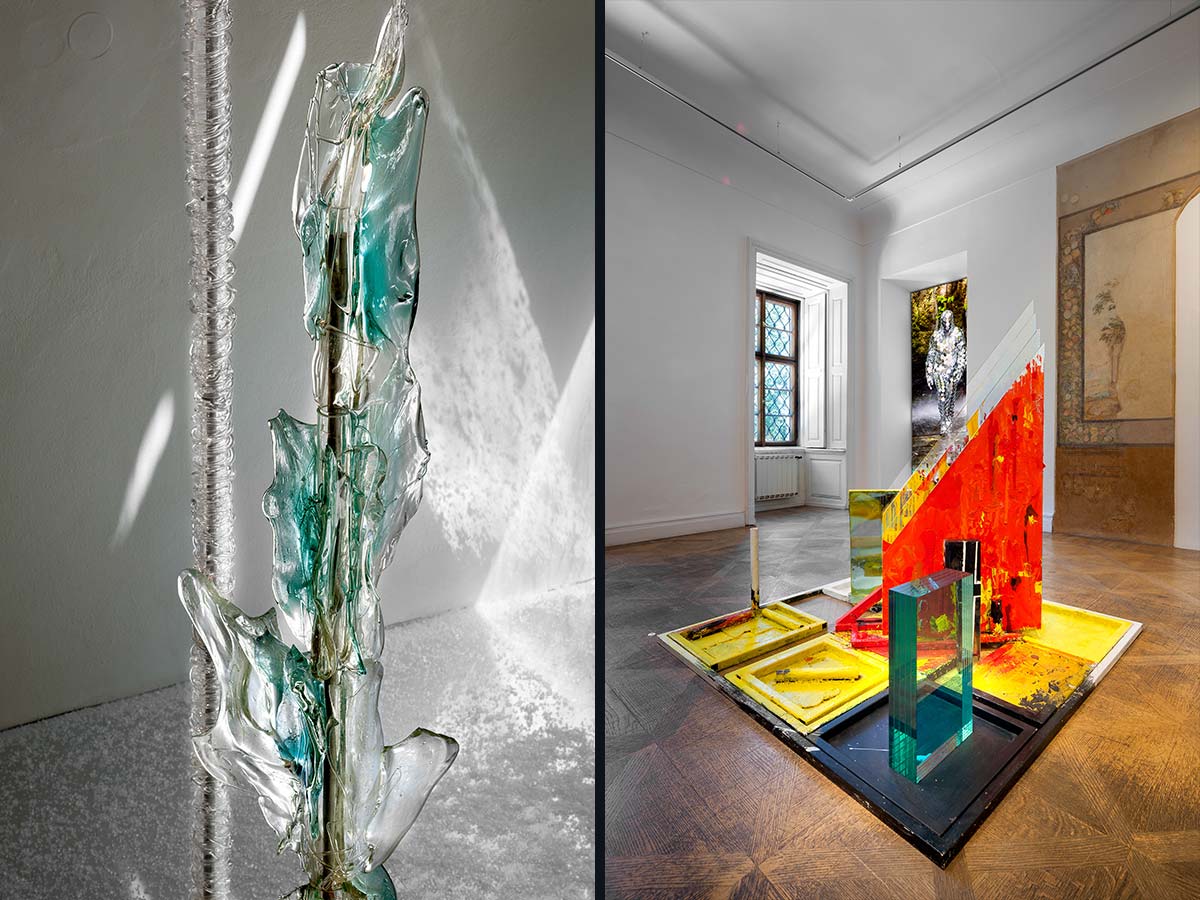 In the second half of the 20th century, the rich history of glass-making lasting several thousands of years was followed by a new field of art, so called studio glass. Out of the glass material, works comparable to today’s painting and sculpture started to emerge. The centre of its development was the former Czechoslovakia and the names of such personages like Stanislav Libenský and Jaroslava Brychtová, Miluše and René Roubíček, Václav Cigler, Vladimír Kopecký, Jiří Harcuba, František Vízner and others started to be discussed with respect by the entire the glass world. Therefore in 2017, Museum Kampa together with the district of Prague 5 proposed to create a new institution that was missing in the capital at that time – a museum of glass art.

The way the art by renowned glassmakers is arranged enhances the baroque atmosphere of the Portheimka Summer Palace. The exhibition helps the visitor get into the mood and feel how the rooms were originally used for representation, invigorating the soul, amusement and as delight for the eyes. We named the rooms the Chapel, the Banquet Hall, the Marble Hall, the Landscape, the Study and the Theatre. The trend of baroquization, pervading art history throughout centuries, is also apparent in modern art glass, which is why the combination of Portheimka and this material is completely appropriate and natural.

In the entrance part of the museum, you will find information on the history of the building and its operation, and in the ticket office, there will be a variety of souvenirs next to a small cloakroom. The text information on the villa is completed by an imaginary portrait of its author, Kilian Ignaz Dientzenhofer, custom-made of transparent glass by the artist František Janák.

In the space with the permanent exhibition located on the second floor, you can walk up a baroque staircase, on which the visitors are accompanied by a thin glowing neon ellipse by Pavel Korbička which was tailor made for the building.

The exhibition continues with the first room – the Chapel, dominated by an illuminated monumental meditative object by Stanislav Libenský and Jaroslava Brychtová, completed by glass artworks by Dana Zámečníková and a portrait plaques by Jiří Harcuba. After walking inside the exhibition from the busy streets, the Chapel offers calm and contemplation for the visitor. This is helped by the black tightened mirror surface under the ceiling as a symbol of immenseness and eternity.

The Banquet Hall is a reminiscence of the lavish celebrations of the aristocracy of that time organized to delight, surprise and astound each other. The room has been darkened and its walls are covered with dark pleated velvet. On a huge circular table amidst the hall, there lies a great number of works by Miluše Roubíčková in a copious composition with different kinds of fruit and more food made of coloured metallurgical glass. This room is dominated by an elaborate chandelier made of metallurgical glass by René Roubíček which was created specifically for this project. One’s attention is drawn immediately to the transience of life and worldly pleasures by the golden skull by Jaroslav Koléšek and a wreath made of black glass fragments by Klára Horáčková. The military symbolism that used to be a common part of the decoration of baroque secular palaces is reminded by the military mirror by Milan Houser. The whole is completed by a cast of a genuine baroque crystal angel fashioned by Alena Matějka. Intimacy, another of the baroque characteristics, is created by a peephole which makes it possible to take a look at a hidden scene made of glass figures by Jitka Havlíčková.

The opulent Marble Hall as the main and also the best-preserved section of the Portheimka interior is decorated by a giant Teresian pendant chandelier hanging under a splendid original ceiling painting by Václav Vavřinec Reiner. It forms a contrast with the modern surface of a black mirror with an object by Václav Cigler. Another object by the same author, the lens, enables the visitor to observe what is going on in the nearby park through the optical illusions it creates. The niches in the walls are filled with four baroque elaborate vases by Bořek Šípek, and two blown busts made especially for this space by Martin Janecký. The hall and its content give the impression of festive opulence, necessary to represent and make you stand in amazement. The space is ready to be adapted for social events – it can be transformed into a chamber concert hall, for example. After all, it was the young Antonín Dvořák who performed in this very place.

In the Landscape, ladies and cavaliers arranged their rendezvous, played parlour games, went for walks or rides, or went hunting listening to the bugle. This is how they whiled away the time having fun. The central object of this space is the expressive work by Vladimír Kopecký reminding us of the landscape. The fragments of the original mural paintings in the form of openings to the landscape and festoons are followed by hazy landscape paintings by Lada Semecká and a large-format illuminated photograph – an extravagant performance of the Mirror Man by the artist Stanislav Müller. Hunting as a popular distraction is reminded by a large painting of a deer with golden antlers by Jana Voldřichová painted on glass. The whole ample scene is observed by an abstracted figure by Gizela Šabóková.

In the section called the Study, works by Czech classic artists are completed by a selection of around thirty works by renowned foreign artists: Dale Chihuly, H. K. Littleton, Erwin Eisch, Kyohei Fujita, Isabel De Obaldia, Mare Saare, Jeff Zimmer, De La Torre brothers, and others. The other exhibited works are from the studios of Czech artists. With a few exceptions, the Study contains objects from the collections of the Museum of Decorative Arts in Prague, the partner of the project Portheimka – Glass Museum. The Study is formed by glass-fronted shelf-mounted walls filled with “precious items, gems and curiosities” from all over the world almost up to the ceiling. It is a kind of treasury of knowledge, a precursor of today’s museums. The Study drew inspiration from the well-preserved wooden ledge above one of the doors. The impression of luxury is created by the golden paint on the furniture.

Another room is a stylized theatre; the space is dedicated to the noble cultural activity so typical of the baroque period. Together with the flying muses by Jiří Šuhájek, the scene features a giant glass dog by Ivana
Šrámková. Light is falling on the room through the geometrical illusive panels made of crystal by Zdeněk Lhotský.

The exhibition finishes at the second part of the staircase featuring an impressive sculpture by Vladimir Klein and two objects through which the sculptor, Petr Stanický, brings beams of light from a busy city boulevard full of life to the museum interior. Thus the visitor returns from an excursion through imaginary Baroque beauty to the art glass world back to everyday reality.

To be found in the foyer is an impressive grouping of abstract glass sculptures which has been placed in a recessed area – these are columns by René Roubíček that became famous after being exhibited in the Czechoslovak Pavilion at Expo 67 in Montreal. The bottom is covered with pieces of glass on a mirror. The adjacent wall serves for educational activities, just as the room following the Banquet Hall on the first floor. The entrance, the foyer and the following exhibition hall have been to the greatest extent restored to their original appearance after previous unfortunate modifications made in the 1990’s. One can once again view the adjacent park through the newly reconstructed windows. Thus the park becomes an imaginary part of the museum. Here nature meets in perfect harmony with the artistic glass forms.

Acknowledgements: To Roubíček’s family, Museum of Decorative Arts in Prague, artists and private collectors for loaning the exhibits and for their kind help with the preparation of the exhibition

We would also like to express our thanks to the Municipality of the Capital of Prague – Department of Historic Preservation, National Heritage Institute in Prague a. s.,CENTRA a.s., and the academic painter Václav Špale